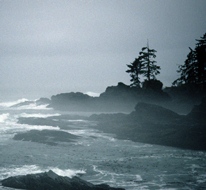 The long generation time of many tree species makes them vulnerable to fast environmental changes. Decisions made today will have consequences for several decades. Thus, proper planning in face of climate change is crucial for forestry.

It is important to examine which role NordGen Forest may have in assisting Nordic forestry in adapting to climate change and how to anchor decision making in science. In order to target and improve the dissemination work of NordGen Forest, the Working group on genetic resources conducted a survey among major actors in the forestry in Denmark, Finland, Norway and Sweden to both assess the awareness and the need for more information about climate change.

The questionnaire was sent to 153 respondents covering the main institutions in the forestry. The overall response rate was around 30%, but varied among countries. Since the forest sector is organized differently in the four countries, we have not compared the answers across countries, but rather focused on the overall trends in the material.

The first part of the questionnaire intended to assess the general awareness and attitude towards climate change related questions. The respondents were first given six statements (Figure 1, number 1-6) to be rated from one (totally disagree) to five (fully agree). As shown in Figure 1 the respondents mostly agreed to all statements. Thus, climate change issues are clearly recognised to affect different aspects of forestry.

The last two statements in Figure 1 are related to the implementation of climate change adaptation in strategic documents and guidelines in forest organizations. Compared with the first six statements, the last two generally got a lower score. This shows that although most respondents agree that climate change will affect forestry, it has not influenced strategic documents and guidelines correspondingly. From comments given by respondents it is also clear that measures to mitigate climate change, e.g. forests as a carbon sink, are more frequently highlighted than measures for climate adaptation. The use of exotic tree species is a frequently mentioned method to mitigate the effects of climate change. Interestingly, the use of exotic tree species was given a relatively low average score in the survey. Although a large proportion regard more use of exotic species as necessary, more than 30% of the respondents are hesitant or reject use of such species (see figure 1, number 6).

Information needs in the forestry sector

Given the information needs revealed by this survey, NordGen Forest should emphasise dissemination of scientific information for the decision-makers, as well facilitate communication between researchers, managers and practitioners within the forest sector. Although mass media and research institutions were important current sources of information about climate change, email newsletters, popular scientific journals and conferences where suggested additional sources, all of them requested by more than 50% of the respondents. Internet, scientific journals and meetings were less valued (marked by 25-40%), while text books were only preferred by 4%.

The role of NordGen Forest

In conclusion, the survey has provided important insight about the awareness and information gaps related to climate change in Nordic forestry.  Particularly important for NordGen Forest is the clearly expressed need for translation of scientific knowledge and the potential niche that we could fill, by facilitating information exchange between researchers and foresters.

In addition to dissemination work and projects, NordGen Forest organizes currently one conference and two thematic meetings annually. These are the core tasks, and a clear message from the survey is that these activities should be maintained and strengthened. In addition, there is a wish for more information through email newsletters and articles in forestry journals. NordGen Forest has to consider how such information sources can be used more actively. Irrespective of information channels, however, the main emphasis should always be on the quality of the information.
Text: Jørn Henrik Sønstebø, Kjersti Bakkebø Fjellstad and Tor Myking