The days are getting shorter and the temperature drops. October in Svalbard means that the long polar night is approaching. But before the sun sets for the last time this year, the members of the International Advisory Panel are having their biannual meeting. The purpose of the panel? To advice the partners responsible for operating the Seed Vault and provide transparency to genebanks and other stakeholders.

The locals call it the twilight period of the year. These weeks when the sun just hardly manages to climb over the horizon to share its magic light for a few hours each day. This magic light provides the backdrop for the October opening of the Seed Vault when more than 45 000 seed samples will be added to the world’s largest backup of crop diversity in the presence of the members of the International Advisory Panel. 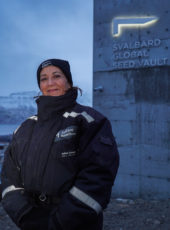 “The International Advisory Panel to the Svalbard Global Seed Vault has a very important role in providing transparency to the genebanks using this service for backing up their seed collections. Svalbard is literally on the other side of the world for many genebanks and to have someone from the outside allowed to inspect the facility and the stored seed boxes and then report back is much appreciated” says Yasmina El-Bahloul, Chairperson of the Panel as well as Research Director and Plant Breeder in Morocco.

The members of the International Advisory Panel gather every other year to meet with the three partners operating the Svalbard Global Seed Vault and discuss issues related to the work conducted here. This year, the meeting coincided with an event coordinated by the Norwegian Ministry of Foreign Affairs who invited some 50 ambassadors to Svalbard to, among other things, learn more about the Seed Vault’s important mission. The ambassadors attended a symbolic seed deposit event outside the Seed Vault where those representing a country depositing seeds this time, were allowed to carry one of their seed boxes to the Seed Vault door.

In total, more than 80 boxes have been sent from 14 different genebanks situated in five continents. These past weeks they have arrived at the airport in Longyearbyen. When NordGen staff arrived, the boxes were scanned to make sure that that they contain nothing but seeds (the boxes are kept under black-box conditions and are never opened). After that, the work with carrying the boxes into the seed chambers and putting them in place on the shelves, some 100 meters into the Plateau Mountain, commence. With this deposit, the number of seed samples stored in the Seed Vault will pass 1,2 million. 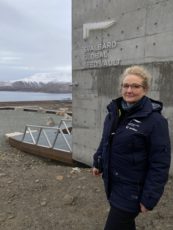 “We are very happy to see that the number of depositing genebanks who have decided to back up their seed collections in Svalbard is constantly increasing. Considering the uncertain world we live in, with climate change, decrease of biodiversity and geopolitical challenges, backing up the collection is currently the single most important thing any genebank can do to protect these invaluable plant genetic resources” says Lise Lykke Steffensen, Executive Manager of NordGen and Secretary to the International Advisory Panel.

Svalbard Global Seed Vault is established and owned by Norway. It is operated in a three-party partnership between the Norwegian Ministry of Agriculture and Food, NordGen and the international organization Crop Trust. 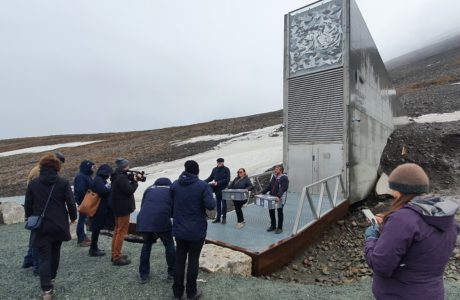