Deep inside an abandoned coal mine, in the permafrost of Svalbard, a black steel container safeguards sealed wooden boxes containing seeds. These seeds are part of an experiment dating back to 1986 after a backup of the Nordic seed collection was put here for safe storage as a kind of predecessor to Svalbard Global Seed Vault. Today, NordGen releases the first report of the experiment.

More than 35 years ago, security duplicate samples of the Nordic seed collection were deposited in Coal mine number 3 outside of Longyearbyen in Svalbard. The purpose of the security storage, which was inaugurated on the 14th of November 1984, was to have a backup of the seed if anything should happen to the original seed collections stored in Sweden and Denmark. Two years later, in 1986, the Nordic Genebank (now NordGen) established the 100-year seed storage experiment in the very same place. Flemming Yndgaard, former employee of the Nordic Genebank, was one of the initiators to the experiment. 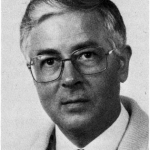 “At this time, the knowledge about longevity of seeds was quite limited. It was known that low temperatures and low moisture contents in the seeds increased the longevity of the seeds, but not how much. The establishment of the security seed storage of the Nordic seed collection gave a good possibility to test the theories of longevity of seeds”, Flemming Yndgaard says, to the right portrayed in an image from that time.

Today, the first results from the experiment are released in an interim report called “Seed Longevity and Survival of Seed Borne Diseases after 30 Years Conservation in Permafrost: Report from the 100 Year Storage experiment”. The report analyzes what’s happened to the seeds after these first 30 years of storage in a coal mine holding a constant temperature of –4°C.

“We can see that nine of the 17 species had retained more than 90% of their initial germination percentage. The mean germination of all samples dropped from 87% to 77% during these 30 years. It was also interesting to see that all pathogens survived over the 30 years, more or less at the same contamination levels” says Åsmund Asdal, Seed Vault Coordinator at NordGen and one of the authors to the report.

Flemming Yndgaard, another of the authors, agrees and adds that he didn’t expect that the seeds containing pathogens would germinate at almost the same percentage as the seeds not carrying pathogens.

“When the experiment first commenced, we were looking for an answer to the question; ‘is it the seed or the pathogen that will live the longest?’. Everyone had an opinion in the matter, however there were as many opinions as there were people involved”, he remembers.

Later this week, the Nordic Genebank, which since 2008 is a part of NordGen, will celebrate its 40-years’ anniversary. During the festivities, the Seed Longevity report will be presented to the many current and former employees and other stakeholders of NordGen.

“I am very happy that this experiment was approved by the Nordic Genebank’s board back in the days. And it’s also wonderful to see how the plan we developed has been followed through all these years by the succeeding employees at the Nordic Genebank and Kimen Seed Laboratory in Norway. I’m looking forward to meeting so many colleagues later this week, and discuss the experiment again”, Flemming Yndgaard says.

You can download the full report through this link.

Watch a short video about the experiment