About seventy people participated when NordGen Forest arranged a thematic day in digital format, which focused on somatic embryogenesis and cuttings propagation. The speakers shared their experiences and spoke about the potential of the methods for the forest industry.

This year’s first thematic day from NordGen Forest was, just as in 2020, held as a digital video conference. Four speakers were invited from SLU, the company ARBOS and the foundation Det norske Skogfrøverk and the title of the theme day was “New Technology in Forest Plant Production”.

The first two speakers dealt with various aspects of somatic embryogenesis (SE), a method that researchers have used since the mid-1980s. By using seeds from immature cones, embryos can be mass-produced in a lab environment, which can then germinate in substrates and grow into plants in greenhouses or cultivation chambers. In her lecture, Ulrika Egertsdotter, researcher at SLU, talked about how somatic embryogenesis works and displayed pictures from the SE lab in Umeå Plant Science Center.

“The advantage is that you can get an unlimited amount of sample material from different embryo development stages from the same individual. As I see it, the Nordic countries are at the top when it comes to somatic embryogenesis in conifers, but when it comes to industrial production in forestry, countries elsewhere in the world are ahead”, said Egertsdotter.

An example of large-scale production of SE plants can be found at the Canadian forestry company Irwing. Developing a cost-effective industrial production is a challenge, but an automated pilot plant for SE is currently being built in Umeå by SweTree Technologies. The facility will open later this year with the purpose of producing a basis for a large-scale factory with a capacity for 20 million spruce plants per year. Next speaker was Daniel Gräns, a researcher on forest plant production and teacher at SLU’s Skogsmästarskolan. Among other things, he has worked on a project that examines how the sprouts manage when they leave the safe environment in the In Vitro lab.

“For example, we have seen a big difference in how different clones react. In other studies, there are also indications that SE plants might have coped better against infestations by pine weevil”, said Gräns.

The second lecture section focused on experiences of cuttings propagation. The speaker Stellan Karlsson is a consultant in the company ARBOS and has worked with cuttings propagation for “40 years in 40 countries”. Among other things, he was involved in building up a large-scale cutting production at the company Hilleshög in the 80s and 90s.

What lessons were learned during the work? For example, a sharp knife is more effective than using secateurs when cuttings are to be removed and aging is an important aspect in cuttings propagation.

“Using young mother plants is a prerequisite for a successful process. The parent material should be changed every four or five years. Problems with fungus are also common, so you should have a fungus treatment program for both the mother plants and the cuttings”, said Karlsson.

The last speaker of the theme day was Torstein Myhre, who has extensive experience of forest plant production and tree breeding. He works at the foundation Det norske Skogfrøverk, who has been producing cuttings since 2018 when tree breeding centers was established by the foundation. Last year, just over 13,600 cuttings were produced from 800 plants. One purpose of the production is to produce experimental plants for breeding material.

“The greatest challenge has been to gain control over air temperature and humidity. That is why we tried to build a tent over the cuttings in the greenhouse, which reduces the air volume and gives a shadow effect”, said Myhre.

The theme day was not recorded, but those who are interested in more information about each topic are welcome to contact the speakers. The next event from NordGen Forest will be a conference held in physical or digital form from 22 to 23 September this year.

The close-up picture of somatic embryogenesis is photographed by Sofie Johansson/SLU.

Now it’s time to apply for NordGen’s and SNS forest scholarship – read about one of the scholarship holders from this year. 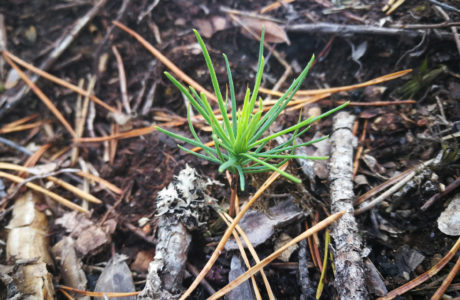