Diseases are the biggest challenge in potato cultivation and due to climate change the problems will probably increase. With the aim of developing more robust and competitive Nordic potato varieties, private actors, universities and NordGen are collaborating in a PPP project including more than 300 different potato varieties.

Plant breeding is a work that requires a long time and a lot of resources. The Nordic climate also brings special conditions and challenges for agriculture and horticulture. For European plant breeding entities, the Nordic region is considered a small market. Therefore, “The Nordic Public-Private Partnership (PPP) for Pre-breeding” was created – a collaboration with the aim of strengthen plant breeding in the Nordic countries, something that is important for securing the future of our agriculture and horticultural industries. The secretariat for the Nordic PPP cooperation is located at NordGen. During the period 2021 to 2023, four PPP collaborations (see facts below) are underway in which the project SustainPotato focuses on potatoes.

This project brings together three plant breeding programs for potatoes in Sweden (Swedish University of Agricultural Sciences, SLU), Norway (Graminor AS) and Denmark (Danespo) together with researchers from the Norwegian Institute for Bioeconomics (NIBIO), SLU and NordGen. The main focus of the project is to lay the foundation for the development of more robust potato varieties that are better adapted to cope with diseases, which would increase yields and reduce the need for pesticides.

– This project is unique, it is the first Nordic collaboration of this kind in potato breeding. Adaptation and evolvement of diseases are the biggest challenges within potato breeding. If the climate gets dryer, or if there will be more fluctuation in the weather, the problems will most likely increase, says Muath Alsheikh, head of research and development at Graminor and the project leader of SustainPotato.

The project aims, among other things, to develop resistance against several skin blemish diseases and late blight (Phytophthora infestans). The latter is a mold disease that has been a major problem for agriculture ever since the 1840s. Today in Sweden and Norway, 20 to 30 percent of all pesticides in agriculture is used to control late blight. In order to be able to develop better potato varieties in the future, over 300 potato varieties are included in the project (see facts below).

The vast majority of the varieties come from the participating plant breeding programs. NordGen contributes genotyping and phenotyping data for about 40 varieties conserved in the genebank, a material that has not been used in plant breeding before.

– In the project, we want to go through the material available in the Nordic countries to see what potential there is for the future breeding. NordGen contributes several older Nordic varieties, and many of them are not to be found anywhere else, says Pawel Chrominski, NordGen’s Senior Scientist responsible for potatoes and the representative in the project.

All potato varieties will be studied based on genotype (the exact genetic traits of an individual, most often studied through DNA samples) and phenotype (the observable traits and characteristics such as plant size and leaf color). Using DNA markers, the potatoes are mapped to provide more information on the genetic basis of the Nordic potato varieties.

In the project, field trials will be carried out in the three Nordic countries to study observable characteristics in plants and tubers. This information is shared between the project participants. In the cultivation trials, new technology such as drone photography in combination with image analysis programs will be used, so-called high-throughput phenotyping (HTP).

– Today we rely on field studies, we rely on the human eye. This information depends a lot on the person in question and how much that can be accomplished in a limited amount of time. Through improved phenotyping, we will learn more about the important genetic traits, says Rodomiro Ortiz, faculty professor and chair of Genetics and Plant Breeding at SLU.

DNA technology in combination with HTP can save both time and money for the plant breeders, something that will result in more competitive companies. In the SustainPotato project, there is a foundation for developing Nordic potato breeding, but both Ortiz and Alsheikh agree that the collaboration needs to continue for a longer time than three years.

– We all work together to boost the potato breeding and to be successful on a Nordic level. But we need to continue. It will probably take nine to twelve years before we can deliver something that is really useful, says Muath Alsheikh.

The top photo shows the breeding line “Y 67-20-40”, one of the 95 potato varieties that are conserved in vitro by NordGen. 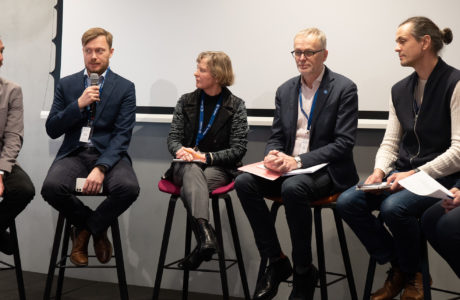