The Faroese horse (Føroysk Ross) is an integral part of agricultural history on the Faroe Islands. There is no unambiguous evidence of the origins of the Faroese Horse. It is believed, though, that the Faroese horse was brought to the islands by Celtic or/and Scandinavian settlers approximately 500-800 AD.

Molecular genetic studies have indicated the closest genetic relationship with the Icelandic horse. Influences from Dartmoor and Exmoor ponies are also likely. Traditionally Faroese horses were kept free ranging in the mountains, and only gathered and brought to the villages when there was a need for transporting heavy goods. After finishing their duties, the horses were again turned out without supplemental feeding. This semi-domestic management contributed to the Faroese horse developing into a small, strong and feed efficient horse with a compact body and strong legs and hoofs, well adapted to the climate, terrain and vegetation. The population size of the Faroese horse was likely 600 to 800 individuals at its highest.

Mechanisation of agriculture and heavy exportation of Faroese Horses to the British Isles as mining ponies resulted in a drastic decrease in population size. Currently a small population of Faroese horse exists on the Faroese Islands, which stems from a few horses born between the 1940s and 1960s. Today, the Faroese horse is used for recreational purposes. The objective of this study was to conduct a pedigree analysis of the current population of the Faroese horse, as well as to describe the possibilities for a sustainable management of the breed by using optimal contribution selection (OCS). 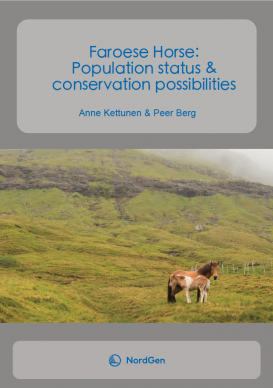