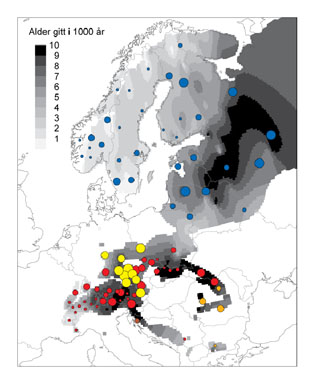 In Northern Europe only one main genetic main group is found, compatible with expansion out of one refugium which was in the southern part of Russia. In Central and Southern Europe, however, several genetic groups are found, related to different areas where spruce was growing during the last ice age. These genetic groups have probably developed following geographical isolation during the last ice age.

The oldest regions of Norway spruce in Northern Europe are in Russia and the Baltics. From Russia, spruce followed a northwards migration route to Scandinavia following the mainland north of the Baltic Sea and from there southwards through Sweden and Norway.

Even though there is only one genetic main group of spruce in Northern Europe, there are several genetic variants. The geographic distribution of these variants also shows that there has been a southern migration route into Scandinavia. Variants that are found in Russia, the Baltic States, Southern Sweden and Southern Norway, but are absent from Northern Scandinavia indicate such a migration route. Long-distance dispersal of spruce across the Baltic Sea has previously been considered improbable. However, spruce shed its seeds in winter, and there is ample evidence that spruce seeds can be blown hundreds of kilometres over snow and ice surfaces. Dispersal may have occurred across the Baltic Sea 2-3 000 years ago during winter via strong winds over the sea ice. Earlier dispersal of spruce seeds from the Baltic may also have happened much earlier, approximately 9000 years ago, when there was a land connection between Southern Sweden and the Baltic coast for a short period.

On an overall European scale, diversity decreased from high to low age, showing that diversity decreased with colonization out of the refugia. There were however large differences between different colonization routes, probably due to climatic factors associated with latitude, altitude, proximity to the ice sheets, and topography that were very different between the northern and the southern refugia. These factors were probably crucial in determining the distribution and demography that shaped the genetic structure of the populations.

The amount of genetic variation of Norway spruce in Northern Europe decreases from east to west and from high population age to low age. In the oldest populations in Russia where Norway spruce has grown for the longest time, genetic variants have accumulated for several thousand years. Even though diversity generally decreased, variation was maintained over long distances in Northern Europe, probably due to the fact that colonization occurred at high population density, involving many trees with many genetic variants. The most pronounced losses of diversity took place in northern and central part of Scandinavia and in southern part of Finland. The high diversity found in the southern parts of Sweden and Norway may be explained by the additional southern migration route.

In Central Europe, high levels of diversity are found in several of the oldest spruce regions. There are however exceptions; for instance in the refugium of the Northern Carpathian Mountains, there is a very low diversity.

During the study, we have aspired to collect our material from natural spruce stands. The DNA fragments analysed comes from the cell mitochondria (the cellular “power plants”) which in spruce are inherited from mother to daughter and thus distributed through seeds, not pollen.

This text is based on Glimt no. 01/09 , Norwegian Forest and Landscape Institute.