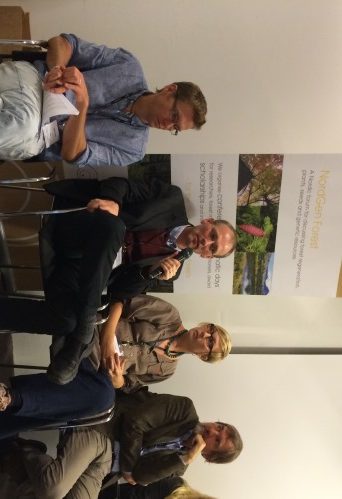 – Mixed-species forests can fulfil many forest functions and services better than mono-specific stands and receive growing attention in forest science and practice. Hans Pretzsch, professor at the Technical University of Munich has his expertise in silviculture and has worked on different mixes of typical European species. Mixed species combinations can overyield mono-specific stands in terms of volume growth, Pretzsch stated at the conference. Further, it has also been shown how species mixing modifies characteristics of the stand such as the density, tree size distribution, and canopy space filling.

Life used to be so simple

Marie Larsson-Stern opened the NordGen Forest Conference 2016 with the words «Life used to be so simple», with a reference to silviculture and the fact that climate change, biodiversity considerations, carbon sequestration, ecosystem services and need for more resources all influence the way we think about forestry and which choices need to be made. Mixed forests might be one of the solutions, she continued, and by that set the scene for an interesting conference with many different angles to the overarching theme of the day.

Adalsteinn Sigurgeirsson continued by giving a political perspective to the subject. The Nordic forestry ministers have adopted a strategic roadmap for Nordic cooperation in forestry. The Nordic Forest Solutions document promotes the role of forests in attaining economic, ecological and social sustainability. Sigurgeirsson stated that many of the services from forests wouldn’t be there if it was not for management. Like trails and a mosaic of different forest types. If wood had not had economic value, the bare land could have been a fact like it was in his own country Iceland some decades ago.

The indoor session on the first day of the conference was filled with a range of interesting presentations; from landscape history via growth and establishment and risk management in the light of climate change to experiences with breeding of broadleaves in Finland, as well as an introduction to the market of forest products through the eyes of IKEA.

Iben M. Thomsen from the University of Copenhagen discussed advantages and disadvantages with mixed forest stands when it comes to pathogens. It is important to consider pathogen pressure and risks when deciding about mixed production of forest, she said. It is not just a question of mixture, but how you mix!

Hreinn Oskarsson and Adam Felton rounded up the day with input on recreation and mixed forest biodiversity. One explanation to the small amount of mixed forests in our area is to be found within the social sciences, Felton said. -Many private land owner’s intentions really is in line with the benefits of mixed forests. But they do not see the mixed forest alternative, or they don’t hear about it from the advisors. It is also a question of communication, he said.

All the speakers were asked how much mixing we need in the future. The answers ranged from around 10 % (due to FSC standards) till “as much as possible”. – The forest owners and the community need to decide on these questions, Pretzsch added.

The NordGen Forest Conference “Growing Mixed Forests – waste or value for the future?” was held in Växjö, Sweden on 20-21 September 2016 and attracted 75 participants from all the Nordic countries as well as Latvia. The moderators at the meeting were Urban Nilsson, SLU and Kjersti Bakkebø Fjellstad, NordGen Forest.

The second day of the conference was dedicated to several field trials of mixed stands at Asa research station and Tagels Gård, as well as a presentation from Södra Skogsägarna.