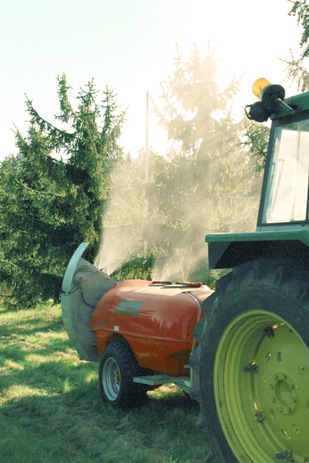 2006 was a good year for seed production, and the Swedish seed orchards for spruce produced almost twelve tons of seeds. This is enough for 1.2 billion plants that can regenerate 450 000 hectares. However, good years for seeding occur normally with four to seven years intervals, and SkogForsk has estimated that there will be a lack of improved spruce seeds for a long time, especially in Götaland (southern Sweden) and Norrland (northern Sweden).

New methods can on the other hand reduce the loss of improved spruce seeds by:

Shortage of orchard seeds of spruce

The orchards presently providing the forest enterprises with seeds are mainly from the first round of orchards (EttO) that is based on seeds from phenotypically superior trees (plus trees) selected in the forest during the 1950ties and 60ties. 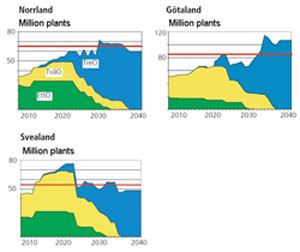 Expected seed production in Swedish spruce seed orchards for the period 2008 to 2040 expressed as number of seedlings. The red lines indicate the expected demand. The coloured areas denote the relative contribution of the different round of orchards in a given year, and show the increasing importance of the third round (TreO) with time. Note that the variation of the y-axis among the figures.

They are now being replaced by orchards from the second round that was planted in the 1980’s (TvåO). The second round is also a plus tree selection, but based on a broader set of selection criteria and done in younger forest and trials.

In the beginning of the 21st century the first seed orchards of the third round of (TreO), were established. TreO is a selection of material from the first and second round which is based results from testing in progeny trials. The new orchards give a higher genetic gain, 13% for TvåO and 20% for TreO, compared with suitable stand seeds.

The shortage of seeds can be reduced by insect control. Cone and seed bugs destroy on average about 40% of the seeds, but crop-spraying can reduce the damages by 60%.

By stimulating the formation of flowers the harvest can increase. This is done by treating the orchard trees with a plant hormone (gibberellin). The effect of the hormonal treatment can further be enhanced by cutting some of the roots to trigger draught stress.

With cuttings you may produce many plants from a single individual, so called bulk cuttings. This could completely meet the demand of improved plant material. It is, however, more expensive to produce bulk cuttings than seeds, but with a higher genetic value it can also stand a higher cost. 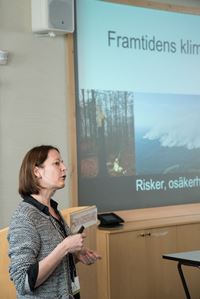 Forest seed and plants in the green shift