The brown bee, Apis mellifera mellifera, is the honey bee subspecies that occurs natively in the Nordic region. In the 20th century, other honey bee subspecies were introduced to this region by beekeepers. Today, the native brown bee is endangered due to displacement and introgression by these other subspecies.The conservation of genetic diversity is imperative for maintaining future adaptive potential. Bees are not only important farm animals due to their honey production, but also due to their pollination services. Roughly a third of the world’s crop production is based on insect-pollinated plant species and honey bees represent an important pollinator.

In 2014, the Nordic Genetic Resource Center published a report on the current status and conservation of the Nordic brown bee. This final report of an international ad-hoc working group, consisting of beekeepers, researchers and members of national beekeeping organizations came to the conclusion that cooperation amongst actors and coordination atthe national and international level in the conservation of the brown bee is of utmost importance. More specifically, consistent characterization of bee populations in the Nordic region to facilitate exchange of breeding material where necessary and development and promotion of brown bee specific management techniques were identified as important conservation measures. The ultimate goal is to have viable populations of brown bees, with characteristics that beekeepers value, in each of the Nordic countries. A priority list of recommended actions for the conservation of the brown bee in the Nordic region was compiled for the first time in 2015 and updated in this second version in 2019. 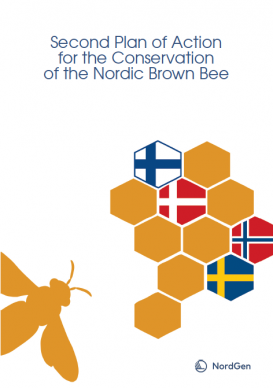