Hem > Nyheter > Skog > The state of healthy Ash in Denmark 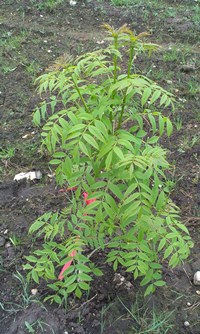 Ash dieback disease is characterised by necrosis in the bark and basal part of the stem, as well as leaf loss, formation of epicormic shoots and crown dieback. In 2015, many trees are either dead or show clear and often extensive signs of infection by the disease.

The theory of resistant trees was strengthened when the University of Copenhagen conducted a registration of health in the Nature Agency’s seed orchards of Ash, and found that among the infected and sick clones there were a few clones showing no or very few symptoms of the disease – an observation that could be confirmed across sites. Subsequent registrations in the Nature Agency’s progeny trials have shown that resistance is inherited from parents to offspring. Thus, there is apparently a basis to use breeding as a tool to solve the problems caused by Ash dieback.

In 2012, the Nature Agency, in cooperation with the University of Copenhagen and Skovdyrkerne, started a project aiming to identify resistant (healthy) Ash trees in state-owned as well as in private forests. In total 120 trees without symptoms were identified throughout most of the country. In the winter of 2012/2013 scions/twigs from the selected trees were collected and used for grafting.

How did it go?

Due to their small size and crown, symptoms of disease are easy to detect and register in the graftings. In addition the young plants respond quickly and significantly to the disease, and plants which are not resistant show clear signs of attack. Also, the graftings are grown in a uniform environment, where they are all subject to the same level of infection pressure. It can be much more difficult to screen trees selected in old and often closed stands where it is often not possible to see the entire crown. Moreover, attacks of Ash dieback disease on large trees may be less visible and the development of the disease may be slower due to their large crown volume. Finally, the pressure of infection may be less in the crown of the large trees since the fungal spores are not so easily whirled from the forest floor and up into the crowns of these dense and closed stands.

These challenges have been well known, and during the identification of healthy trees in the forest, it has been anticipated that some trees after all might turn out not to be resistant. The problem has been addressed by selecting relatively many trees from the start. Furthermore, additionally trees have been selected and today the total gene pool of selected candidate trees in Denmark is more than 200. And consequently after screening in the seed orchards, still a large number of trees are expected to remain for producing genetically diverse seeds for the future.

Similar activities have been initiated in other countries and in 2013 a workshop was organized by the Nature Agency in cooperation with Nordic AdapCar and the European COST network FRAXBACK.

The cooperation with the University of Copenhagen will continue, and the hope is that effective tools will be established that can predict the level of resistance at an early stage. Also, cooperation in European networks and NordGen will continue in order to share the findings.

However, if there are no further significant changes in health or a collapse of the resistance in the selected trees, it seems like a pool of Ash has been established, from which seeds may be harvested and grown into healthy Ash plants. Presumably, the first healthy seeds can be harvested around year 2025.