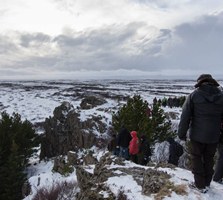 As an introduction to the meeting, Aðalsteinn Sigurgeirsson from the Icelandic Forest Research gave the audience an overview of past and ongoing forest tree breeding activities in Iceland. He further stated that “Iceland is to be regarded as a developing country when it comes to forest. Afforestation is now ongoing, but long-term commitment and support is needed to reach our goals.”

Sigurgeirssons presentation was followed by his colleague Þröstur Eysteinsson, who gave the audience an overview of adaptation and productivity of the main tree species in Icelandic forestry. According to him, the four main productive species are Siberian larch (Larix sibirica), Lodgepole pine (Pinus contorta), Sitka spruce (Picea sitchensis) and Black cottonwood (Populus trichocarpa). On average these grow rather well, also compared to other Scandinavian countries.

Breeding from a financial viewpoint

Several thematic presentations from Iceland, on humans and nature and breeding of larch, poplar and birch, were complemented with Nordic presentations on breeding, both from an economic and a biological viewpoint.

Anssi Ahtikoski from the Finnish Natural Resources Institute (former METLA) asked about the economic incentives for private forest owners to use genetically improved regeneration material. His answer was that yes, there is a financial difference between using improved and unimproved material. And the further north, the higher relative positive impact of using improved material.

Mats Berlin from Skogforsk, Sweden informed about their work on revision of deployment areas for pine and spruce, based on current and future temperatures and climates in Sweden and Finland. “Trees should be hardy enough to survive in current climate and utilize the increased growth potential in a future climate”, Berlin stated. In Finland new deployment regulations are on the way.

Berlin was followed by presentations on seed orchards seeds in Sweden and the potential of future forests in Southern Greenland.

The thematic day, with the title Tree breeding for increased forest productivity in marginal areas, also served as day 1 of the annual conference of Icelandic professional foresters, Fagráðstefnu 2015. Around 120 people attended the meeting.

Björn Helgi Barkarson, representing the Icelandic Ministry for the Environment and Natural Resources opened the meeting, which was concluded with a tour to the forest of Einkunnir nature reserve.