Hem > Nyheter > Skog > Conference with a view to the future 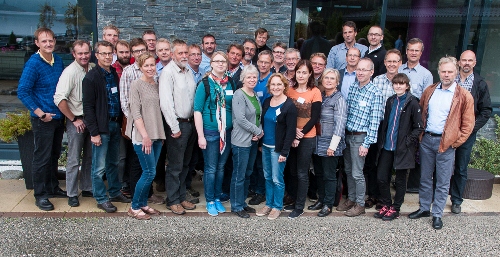 Strømman (Norwegian University of Science and Technology) highlighted the outcome of the Intergovernmental Panel on Climate Change (IPCC) Fifth Assessment Report in his talk, introducing the overall topic of the conference; Need for seed – Nordic forests in coming decades.

Scenarios from integrated models suggest the possibility of very different landscapes from today, Strømman stated. The most cost-effective mitigation options in forestry are afforestation, sustainable forest management and reducing deforestation, with large differences in their relative importance across regions. And bioenergy with carbon capture and storage is important in many low emission scenarios.

Still we need to be aware, since land use change associated with bioenergy expansion, afforestation or deforestation may also affect greenhouse gas balances, albedo and other climate drivers in several ways. Three working group reports have already been released from the IPCC Fifth Assessment report. The last report, which is a synthesis report for policymakers, will be finalized on 31 October 2014.

The conference was rounded off with an excursion to Hoxmark in Ås, Norway, where field trials on different aspects of climate change adaptation in forest trees were presented.

NordGen survey on climate change
Prior to the conference NordGen Forest conducted a survey among stakeholders within forestry in the Nordic countries. The survey suggests that climate change issues are clearly recognized as important among the major actors of forestry. But it has not yet influenced strategic documents and guidelines correspondingly. The reasons for this may be an information deficit regarding climate change, and in particularly a lack of overarching views on measures for mitigation and adaptation to climate change. The results from the survey were presented by Kjersti Bakkebø Fjellstad.

NordGen Forest is a Nordic forum for discussing and promoting forest regeneration, plants, seeds and genetic resources. They organise conferences and thematic days for researchers, forest managers and practitioners, award scholarships and initiate research, for the benefit of Nordic forests. In cooperation with relevant partners, NordGen Forest is prepared to take a role in further communication and dissemination of climate change relevant material.

All the presentations from the conference can be found here.