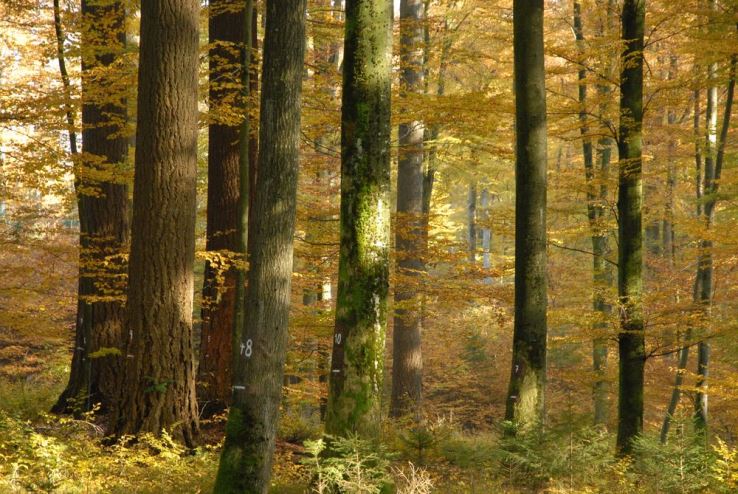 Here, we give a brief overview of the current knowledge of tree species mixing effects on growth at the stand, species, and tree level.

Any changes in tree crown morphology and canopy structure in inter-specific versus intra-specific environments suggest a modification of the trees’ space occupation, resource capture, and productivity. Of special relevance is a wider crown extension as this indicates a competition reduction and an increase in light interception.  If trees in mixture would stick to the same behaviour in terms of structure and growth as in monocultures, this would merely indicate an additive mixing effect (Figure 1, a-c). In forests where tree growth is primarily limited by light, canopy space filling may be denser and light interception higher in mixed than in monospecific stands, indicating a multiplicative mixing effect and resulting in overyielding. Especially when their crown shapes are complementary, the crown expansion may be wider (Figure 1d), the tree packing density higher (Figure 1e), or both reactions may be combined (Figure 1f).

With increasing site quality the effect of this complementary may decrease. Complementary in light ecology is rather useless when water and nutrient are growth limiting, but may increase in effectiveness the better the water and nutrient supply, and the more the light is growth limiting.
The kind of mixing reaction and level of overyielding mainly depends on the potential of the species assemblage to remedy the growth limiting factor on a given site. So, the mixing reactions and their change along a gradient of site conditions depends on the respective limiting factor and the species’ potential to overcome the limitation (Forrester 2014). Complementary in water and mineral nutrients exploitation is most effective and growth accelerating on sites with water and mineral nutrients limitation.

Liang et al. (2016) quantified the effect of tree species richness on the productivity of the world’s forested ecosystems in a most comprehensive study so far. They used repeated forest inventories from 777,126 permanent sample plots that contain over 30 million trees from 8,737 tree species and span most of the global terrestrial biomes. They found a consistently positive concave-down relationship between stand productivity and tree species richness at landscape-, country-, ecoregion-, and global-levels (Figure 3).

Table 1 summarizes the overyielding of common two-species assemblages in Central Europe and underlines that the mixing effects are not only scientifically evident but also practically relevant. Long-term experiments show that in relation to the weighted mean of the mono-specific stands mixed-species stands produce by 11-30 % more stem volume (Pretzsch 2016).

Combinations of eco-physiologically rather similar species (e.g., N. spruce and European beech, N. spruce and silver fir) result in lower overyielding than complementary species combinations (e.g., S. pine and E. beech, E. larch and E. beech). In addition to the mean overyielding and standard error Table 1 shows conservative correction factors which may be used for estimation of mixed stand productivity based on the productivity of neighbouring monocultures. The correction factors indicate that the productivity of monocultures should be multiplied by 1.10-1.20 for estimating the productivity of the respective mixed-species, and they apply for fully stocked mixed-species stands, individual to groupwise mixing patterns and mixing proportions of about 50:50.

For the same species assemblages we found that the mean stand height (-2 %) and tree diameter (+1 %) of mixed stands hardly differed from the weighted mean values of the neighbouring monocultures. Minor inferiorities in the mean dimension of one species are mostly compensated by a minor superiority of the other species.

However, the stand density, indicated by the tree number, Stand Density Index, the stand basal area, and the standing volume, in contrast, are 8-22 % higher in mixed stands compared with monocultures. In most mixtures both species increase their stand density compared with the neighbouring monocultures. The combination of invariable mean height and increase of stand density and total yield results in a significant increase of the level of the relationship by Eichhorn (+16 %) and the general yield level by Assmann (+ 21 %) in mixed versus pure stands.For the same species assemblages we found that the mean stand height (-2 %) and tree diameter (+1 %) of mixed stands hardly differed from the weighted mean values of the neighbouring monocultures. Minor inferiorities in the mean dimension of one species are mostly compensated by a minor superiority of the other species.

Effects on size distribution and stand structure
Based on long-term experiments and temporally established triplets in Europe, the following structural characteristics of mixed stands compared with monocultures can be revealed (Pretzsch et al. 2016). Right-skewness and kurtosis of size distribution and the number of small trees can increase. In most of the mixed stands there was a higher inequality in size and size growth than in monocultures, but similar growth dominance coefficients. The iv-v-relationships indicate a stronger size-asymmetry of competition in most of the mixed stands compared with neighbouring monocultures.

Species mixing can cause a higher stocking density and significantly higher sum of crown projection area (Figure 4). Overyielding of mixed versus monospecific stands increases with the density of stocking and canopy, inequality of size and size growth, and steepness of the size-growth relationship. These differences suggest that deeper entrance into the canopy, more complete interception, and higher use-efficiency of light may be essential for the overyielding of mixed stands.
The finding by Pretzsch et al (2016) that this tendency and vertical structuring increases with site productivity substantiates the assumption that greater light interception explains the increase in density and growth (Figure 4). On rich sites where water and nutrient supply are higher the light complementarity might become more effective than on poor sites, where other environmental conditions are limiting (Forrester and Albrecht 2014).

For acclimatizing to an inter-specific neighbourhood trees species may change their growth partitioning in mixed-species stands compared with mono-specific stands. Most of the comparisons between the productivity of mixed and pure stands are based on stem volume production (Liang et al. 2016, Pretzsch et al. 2015). Comparison based on total biomass production may come to different results, as tree species mixing can change stem-crown allometry (Pretzsch 2014), root-shoot relationship (Thurm et al. 2016), and also tree ring width and wood density (Zeller 2016) as illustrated in Figures 5 and 6.

The shown increase of stand density, Eichhorn’s rule and general yield level should be taken into consideration when developing and applying silvicultural prescriptions in mixed-species stands. The normal density and number of selected future crop trees can be significantly higher than common in mono-specific stands.

So far, knowledge about mixed stands dynamics is rather phenomenological. Further works should strive for general rules and laws, simulation models, and quantitative silvicultural guidelines as available for mono-specific stands. For research and training, long-term experiments are required that explore, how mixing reactions depend on species, mixing proportions, mixing patterns, stand density and site conditions. Such experiments should include unthinned plots as reference for, e.g., site-specific maximum stand density and uninfluenced inter-specific competition. Species assemblages including newly introduced more drought resistant foreign species such as Douglas-fir, red oak, or western hemlock should be included in such new experiments.

Knowledge acquired from long-term experiments will be useful for better modelling, design, and silvicultural regulation of mixed species stands. Urgently needed are in particular silvicultural guidelines for regulating the stand development including mixing pattern and proportion in a way that both species reach a defined silvicultural and economic target state.

In view of climate change we need a better understand of the species interactions in dependence on site conditions; this requires mixed stand research along climate gradients and international cooperation of forest science institutions. This cooperation should include the development of standards for experiments, biometric evaluation of stand data, and modelling analogously to the achievements for mono-cultures.

This is an abridged version of a presentation at the NordGen Forest Conference, 20.-21. Sept. 2016, “Growing mixed forests – waste or value for the future”, Växjö, Sweden. More info